Tag Archives: i hate the scale

I stared it down, but it remained standoffish. It just sat there waiting for me to make the first move. It was ready. I was not. For two weeks, I had trained for this day. Eating better, exercising more, mentally preparing for this moment. I took a deep breath in. 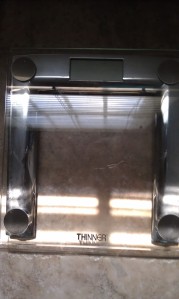 It’s going to be good. Open your eyes. Look. You have to look! Now!

But really, none of this is funny.

I was about three or four pounds up to begin with. What used to be my heavy weight had sat its fat ass down and refused to budge, thus becoming my new average weight. In the beginning, I fought for my old weight like it was the last tub of ice cream in the freezer aisle – okay, not the best analogy – but, really, I worked out more, ate less ice cream, the whole bit. Still, no matter what I did, nothing changed.

After a while, I kind of got used to it. With all the other stuff going on in my life, something had to give a little, and it was the number on the scale. Even though, I was secretly waiting for it to magically disappear like it used to, I did my best to accept. That was until my husband booked us on a trip to St. Thomas with some friends at the end of August.

Sounds fabulous, right? Did I mention all the women going are thin? Yeah. I’m embarrassed to admit I considered bailing on that alone. Apparently, I’m that superficial. I’ve spent a lifetime trying to feel comfortable with my body, and I can tell you the exact times and places where I succeeded. Hawaii, 2000. Costa Rica, 2001.

People might say, I net out on the thinner side, and that may be true, but I don’t see it. I don’t want to tell you what I see, but it has kept me from basically wearing a bathing suit for years. It helps that I don’t like the pool or the beach, and with sun tanning out of favor, well, it’s a good cover for my cover-up.

It might be that I’m over 40 and despite my inhuman mother, my metabolism ain’t what it used to be. But I’m not throwing in the towel. No. I’m going to keep at it. At least till the trip. What else can I do? Except, maybe just lighten up.

Posted in Crap that makes me eat too much ice cream, Weight Watching and tagged can't lose weight, diet and exercise, getting older and gaining weight, i hate the scale, i want to look good at the beach, losing weight for a vacation, poor self image. Bookmark the permalink.
Loading Comments...