I Dream of Bikini

For years, decades really, I have wanted to wear a bikini. In my mind I saw the perfect one. It was always bubblegum pink with those 70’s strings hanging from the sides of the bottoms. I also imaged smooth, thin tanned legs that those sexy ties would be resting against, as well as the long lean torso showcased in the middle.

This would explain why besides the three times in my distant memory, I have never worn a bikini.  The fantasy is not the reality and for a long time I was the kind of girl who thought if you can’t do something right, don’t do it. I’m still sort of that kind of girl.

Thus, years of swim dresses and cover-ups ensued. I even successfully managed to go without wearing a bathing suit for an entire summer – twice.  Of course, all of this is unnecessary. I could certainly comfortably wear a swim suit, but that doesn’t mean that I am comfortable doing it. Also, since I dislike the water – both pool and ocean – turns out bathing suits are easier to avoid than you’d imagine.

I worked within these confines for basically my entire life, but the other day I was flipping through a bathing suit catalogue that somehow mistakenly wound up in my mailbox, and I came across a suit that almost fit my fantasy… as did the model wearing it. I lingered on the page; silently coveting and felt a shift within me.

I wanted that suit.

I couldn’t believe it. Now that I was over 40, had three children come out my pooched, overstretched stomach, I was going to cave? Was this some trick of middle age? I knew I couldn’t see distance well anymore, but could I no longer see myself clearly either? Did I really think I could get away with this?

Logically the answer was no, at least not in the way I’d like to, yet still I felt gripped by urgency. This was probably my last chance to wear something like this before middle age really set in around the middle.

I’m already done with having children. I’m done with going out late nights and dancing till dawn – okay, I don’t think I ever danced till dawn, but you know what I’m saying. I’ve got wrinkles and pains. I’m happy to be in bed by 10pm. I like hot water and lemon. I carry hard mints in a Ziplock bag. I’m – Aaaaccck – getting older.

I’ve noticed other emotional changes in myself as well, now that I’m further up the maturity chain. I’m a little more ready to take chances, a little less judgmental, more appreciative, less giving a shit. I’ve also gotten simultaneously more and less vain; which means, I notice many more things that bother me but I also don’t care as much.

Which brings me back to the bikini I’ve coveted but never owned much less worn; it was now or never. Without thinking any more, I added it to my cart and clicked purchase.

I don’t know if I’ll ever wear it, but lately I’m full of surprises. 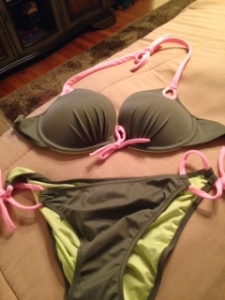 Mama to 3 boys, wife to Mr. Baseball and daughter of a sad man. I have a double scoop every day.
View all posts by Ice Scream Mama »
← Accidents and the drive to feel pretty
Missing Dad →