Facebook RSS Feed
← Scale. You’re going down!
There is a wall up in his studio apartment, and it’s me. →

And, since I’m brainwashed by motherhood to take it easy on the small wusses, I mean children, I’m probably the least competitive of the bunch.

All three of my boys, ages 5, 8 and 11, compete on everything from who can stare without blinking the longest to who will get to the car first. They compete on whose drawing is better, who grew more, who likes pizza the most or even who’s the rightful owner of the number five.

8 year-old – No it’s mine, because David Wright is number five.

11 year-old – I liked it before you guys were born!

Their competitive streak runs deeper as well. They argue over who is the most likable, smartest, or, the ever popular, who can love mommy more, with all three of them simultaneously trying to squeeze the life out of me.

Competition might just run in their blood. My husband, aka Coach, aka Mr. Baseball, leads the charge in all the sports they play, especially baseball. When not at a game or practice, Coach and his boys are on the lawn engaged in some kind of game that usually ends with one or more of my children crying over who won or who lost.

Coach’s dad, Grandpa H, is no competitive slouch himself. Whether playing my kids, a geriatric, one-eyed, limping widow or men his own age, his joyous cries of victory, after killing a shot, echo from mountain top to mountain top.

And my mom, Grandma S, for all her giggly cute smiles, is a shark in short shorts. No one, not even Charlie Sheen on a crazy streak, takes winning more seriously.

Whether nature or nurture, I find competition healthy and productive, for both the winning aspect and the losing. However, when it occurs, as it does regularly, inside of the family, it’s another story.  The results of competition as sibling rivalry range from frustrating tantrums at the least to confidence crushing at the worst.

Competing with a sibling, especially one older is almost a guaranteed set up for failure and feelings of inadequacy. No matter how much I protest and remind them that they are in completely different developmental ages and stages, they have already categorized themselves according to the other.

I can’t stand the idea of my middle son thinking he’s less than his older brother, simply because he’s competing against unfair parameters. My youngest is still young enough not to be affected, but my middle guy constantly beats himself up. No matter what I say, he refuses to believe his own worth.  He just shrugs and says almost defiantly, “I’m just not as good.”  It breaks my heart.

It’s hard to draw the line between healthy competition and unhealthy sibling rivalry. I want my kids to be competitive, just not with each other. Yet, I don’t know how to stop it.

Early on, I even inadvertently encouraged it with little contests designed to motivate.  You know… “Who’s going to get in bed first?” Or, a favorite, “Who can be quiet longest?” I don’t do that anymore, but back then I didn’t realize the seeds I was planting. Still, even without the mommy motivator or the daddy influence, I don’t know if they’d be much different.

It’s like they’re in a race with each other from birth… my oldest far ahead, my middle struggling to keep up and my youngest, not really caring as much, and just kind of attaching himself to the oldest in all his glory. Sigh.

It seems all I can do is be aware of it, discourage it, and do my best to build each of my children up on their individual strengths.

Those articles I read about birth order and sibling rivalry are true. The race starts right from the womb, with the finish line being the only one that no one wants to cross first. 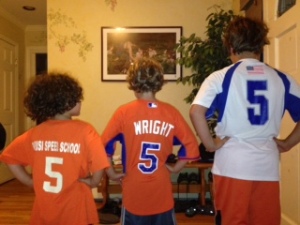 Mama to 3 boys, wife to Mr. Baseball and daughter of a sad man. I have a double scoop every day.
View all posts by Ice Scream Mama »
← Scale. You’re going down!
There is a wall up in his studio apartment, and it’s me. →