They are fighting at the breakfast table.

“I have the most loom bracelets.” My little one brags, even though he doesn’t.

“You do not.” My eight year-old is quick to correct; soggy, Honey Nut Cheerios falling from his mouth.

“Yes I do!” My five year-old insists, holding on tightly to his dignity.  It’s a loom eat loom world.

“You don’t!” My eight year old yells, totally agitated. He is the enforcer of justice in the world, except when he’s wrong, then he’ll just scream till you forget what the original argument even was.

“Stop teasing each other,” I reprimand mildly, wiping up the cereal. “And eat.”

“No! I won’t” My boy with the offended morals exclaims. “He’s wrong. Admit it.Tell him, he doesn’t!”

I sigh, heavily, and tell my five year-old that he indeed does not have the most bracelets.

“It would just be nice if you guys wouldn’t make the biggest deals over the smallest things.”

“Okay, you need to stop yelling.” I’m getting annoyed.

Eight year-old has transferred his frustration onto me and I’m close to transferring mine right back.

I need to put an end to this nonsense. “Okay, stop it right now, or you’ll both go to your rooms!”

At that, my 11 year-old, who had miraculously been minding his own business, snickers.

“You. You’re not sending anyone to their room.”

“What do you mean?” His twinkly, smug smile is pissing me off.

“I mean, you let everyone get away with everything.”

“Yeah, you don’t really ever do anything.” My eight year-old pipes in merrily. Nothing like fresh meat to turn the tide.

“Yeah Momma! Yeah momma!” My five year old chants, standing on his chair doing the ‘my momma has no balls’ dance.

Apparently, everyone is getting along just fine now.

I’m going to my room. 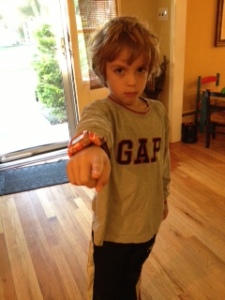 He’s going to be so much better at it.