“Mama!” I hear him yell from his bedroom; his need finding me, even though I’m downstairs in the kitchen cutting an apple for my older son.

“Mama!” He yells again and I roll my eyes. I’ve specifically told him not to call for me, that I will be there shortly.

Even at six years-old, lying with him at night is a non-negotiable. I love it more than it annoys me, which I repeatedly remind myself as his calls become more insistent.

I could enjoy relaxing with him more if I didn’t feel anxious about also getting the other boys into bed. If I didn’t hear the loud tick-tock of the clock in my head, announcing with every beat that it’s getting later and later; that I won’t have any time for myself and my husband, that they will not get enough sleep, that they are stomping on my last nerve and I might just snap, ruining a perfectly good day in the very last minutes.

I finish slicing and trudge upstairs to my oldest son’s room where he is reading a Tom Green book and happy for the snack. I note that he is fully dressed, and even though I’d rather he be studying his vocabulary for a test tomorrow, I hold my tongue on both counts. He’s eleven. I need to cut him some slack. Besides, I’ve told him twice already.

I stop in my middle guy’s room to tell him to stop shooting basketballs and get in bed. He continues shooting, so I tense, preparing for battle. “Just let me make this shot!” He bargains, sensing the imminent loss of his ball. I accept his compromise thankfully, confrontation averted.

Finally, I head to my youngest son’s room. He’s hiding under his covers, preparing to jump out and shout ‘BOO!’ He does it every night. I used to feign surprise but now I just tousle his head. “Boo yourself.”

“I heard you.”  I say, pushing a long dark curl away from his face.

“But you took sooooo long.” He complains.

“You were supposed to be relaxing.” I scold, but not really.

He nuzzles closer, unzipping the extra sweatshirt I’m always wearing because even in the house I’m cold, and tucks his little arms in and around me.

“Stay for 10 minutes.” He coos, snuggling his face against my chest.

He still loves squishing into my boobs. Since he was three, he’s been trying to cop a feel.

“Two minutes.” I whisper, feeling my insides go mushy at the soft curve of his cheek, the long lashes, and pouty mouth. With his eyes closed, he still looks so much the baby and I tenderly kiss his fat cheek that’s not as chubby as it used to be.

My baby instinctively pulls me closer. “No, not yet.”

I pet his head and kiss him again, knowing it’s time to go, wanting to go, but afraid of the day he’ll just let me, so we cling to each other a little more.

I really want them all to be sleeping. It’s late. I’m tired. I want to relax and watch Modern Family. But I can’t stop myself from taking the moment to baby each one of them; to remind them that they’re still little and special and mine.

It’s time to go, and I gently but forcibly extract myself.

There are still two more rooms to visit. 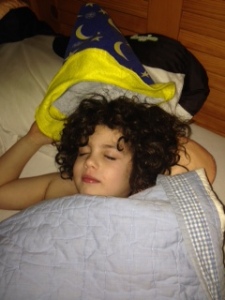 Mama to 3 boys, wife to Mr. Baseball and daughter of a sad man. I have a double scoop every day.
View all posts by Ice Scream Mama »
← Say Cheese!
You say middle. I say center. →