I wonder if I’m even going to miss the vomit?

At 2:30am, I opened my eyes with a start. Boy who never sleeps and barely eats, aka my seven year-old, is standing next to my bed. I felt him there, heard his soft breathing. So even though I’m a little unnerved to see him, I’m not surprised.

His soft breathing has a rasp to it. “I don’t feel good.”

My first instinct is annoyance. Stellar parenting, I know, but it’s the middle of the night. I push the thought away. “Oh baby.” I say. His little face looks pained and then it gets that look. You know, the one that makes you immediately look around to see if you’re standing on carpet or near something valuable. I leap from the bed, and practically shove him from my room to the bathroom. We make it just over the threshold before he throws up.

Yes! I’m doing a mental fist pump, ridiculously relieved to have made it at least onto the tiled bathroom, where clean-up is markedly easier. Hmm. Should this not be my first thought? My second is not much better. I’m making a list in my head of the things I won’t be doing since I’ll have him home from school the next day. To redeem myself, I rub his back as he continues puking all over the floor.

I should have seen this coming, in fact, I did.

Earlier that day we were at video game center, or more accurately, the gambling learning center for 5-12 year-old’s. The object of every game is to win tickets. My kids foam at the mouth for tickets. No matter that we spent $30 for four army men, six tootsie rolls, a rubber frog that smells funny and a key chain. At least they’re learning something.

In the middle of the debauchery, my seven year-old son approached. “I want to go home.” He whined.

I noticed his eyes were a little glassy, but I attributed that to the excitement from all the gambling. Then he sneezed and snot blew out his nose and hung in clean, oblong droplet to his lip.

“Tissue!” I screamed, running for my bag. “Tissue!” My capacity for denial runs deep, people. I saw the truth, but I wasn’t ready to accept it.  I told myself it was just a cold. We headed home, and not because of the stares of horrified gamers, but because we wanted to. So there.

I made breakfast for dinner and the boys had ice cream snowmen cups from Baskin Robbins for dessert. I didn’t take much notice that the boy who never sleeps and barely eats, didn’t eat much. Uh, nothing new there.

I snuggled them all into bed, spending extra time cuddling. I am acutely aware of the passage of time, and allow my sappiness to seep out at night, making me a pawn for their pleas of “Just one more minute!” or “I’m hungry.”

I know that each stage that passes brings me older, more mature children, less needy of their mommy’s attention. Little things change, like, my middle one only asks me to tickle his back for a few moments every few nights, instead of the rigorous tickle back routine I used to affectionately endure. My oldest no longer loves me coming to his sport games. All of a sudden, I make him nervous.

But my baby, my now five year-old baby, is still so full of mommy love that sometimes I’m pushing it away. Uh honey, can we triple hug and kiss again later? Mommy wants to work on an essay. Where is that DS?  I reflect with horror. I am actually taking some baby love for granted, when soon it will (poo poo poo) grow up and leave me cold. No more, I vow. We will hug day and night!

That’s when the vomit hits my foot and startles me back. I want to throw up too, but, instead, I get him some water, strip him down and wash him up. Then, I give him some Tylenol,tuck him back into bed, spending some extra time tickling.

With him settled, I get on my hands and knees and start the fabulously exciting activity of cleaning up. It’s after 3 am, I’ve still got to get all the towels and clothes into the laundry and clean myself up before I get into bed. We’re talking close to 4 am. Is this really something I’m going to miss?

Before I can even get my disgusting bundle down to the laundry, I hear his little voice call to me. “Mama…” I drop the towels and run to his room. Yeah, no question, I am. 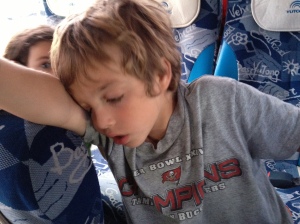 (This is a re-enactment photo. No sick child was photographed for the making of this blog. He’s good, right?)

Posted in Every Day Scoops and tagged growing up, humor, nostalgia, parenting, sick kids, up all night, vomit, Yeah write. Bookmark the permalink.

Mama to 3 boys, wife to Mr. Baseball and daughter of a sad man. I have a double scoop every day.
View all posts by Ice Scream Mama »
← 2012. It’s a Wrap!
Clue: Don’t play Board games with my husband →