TKD puts my parenting to the test

My seven year-old son, Michael, started doing Tae Kwon Do when he was three. I loved that hour watching him in his crisp, white uniform through the foggy glass partition. He did his stance and said, “Yes sir!” He tried to mirror jumping jacks, not quite coordinated enough to get his arms and legs moving together.  He learned his five basics. He was a tiny figure of strength and determination. I couldn’t get enough.

Almost three years later, Michael’s uniform may not have been as crisp, but his love with TKD was still fresh. It gave him confidence and a sense of pride. I wasn’t as in love with the overly disciplined environment, but I couldn’t argue the results. Plus, any small bump we hit, Michael high jumped right over. Now, he was getting ready to test for his purple belt, pretty impressive for just six years-old. 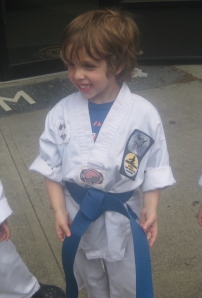 The TKD tests are like a military recital in a sweaty, tense room stuffed with family, instructors and kids, for well over an hour.  The Master sits at a platform, scrutinizing and shouting orders. He could be tough on the kids. In the right (or wrong) mood, he pushed the kids and even taunted them. An imposing figure and an 8th degree black belt, he didn’t have to try too hard to make them nervous. He certainly made me nervous.

It was only Michael and two other six year-olds testing that day for Purple. The three had gone up through the ranks together. Small but mighty. I sat on the sidelines, biting my nails while watching him at the center of the mat, being ordered to display his mastery over his moves.  Unlike me, Michael was confident and poised. He and his friends breezed through their requirements. I breathed. It was a mistake.

“20 push-ups!” The Master yelled, and the boys dropped to the floor and did their best imitation of a push-up, while shouting out the count. They struggled, but with effort made it to 20.

They waited in push-up position to be released. Instead, the Master ordered, “10 more push-ups!” Shaking slightly, the boys did 10 more, their push-ups more like just-ups. They could barely even go down.

Together they screamed, “No sir!”

Their little bodies struggled once more. It was turning into a sorry display. People were beginning to look away. I wish I could look away, but my welled-up eyes were glued to the center of the mat and my son’s intent, determined face.

“You want more push-ups?” The Master tested again after they finished.

The instructors circled, mouthing something to the boys.

“No, Sir!” Their tiny voices squeaked. One of the boys was visibly crying.

“10 more!” The Master yelled again and down their blonde heads and tiny bodies went, no longer shouting, almost sobbing till they pitifully reached 10.

I was torn, completely torn. I wanted to stand up and scream, “Stop this! Who the hell do you people think you are?” But I sat there, with all the other parents, tears streaming down my face, my 6 year-old holding it together better. I just couldn’t believe what I was witnessing along with about 50 other people. Was this okay? This didn’t seem okay at all. It seemed like abuse. Why were we all just watching?! Why wasn’t I stopping this ridiculousness?!

It pains me to admit, but it took another round, with all the instructors and me shouting the correct answer at them, before the boys actually understood that they needed to say “Yes, sir!” for the Master to stop punishing them.

Finally, it was over. I was horrified, disgusted and ashamed. I had failed my child.

What could I do to make it up to him? I walked to him sheepishly, my arms wide open, where my mouth had stayed firmly shut.  After a hug, I told Michael he could quit if he wanted to.

He shrugged it off and me as well. “It’s okay, mom.” Then, he beamed radiantly and proudly lifted his hard earned prize. “Look at my new belt!”

I smiled through my tears. “You did amazing. I’m so proud of you.” And I was. I just wanted to kill the Master. Instead, I ushered my kid out and took us all for ice cream.

Michael passed his test that day, but I still wonder if, as a mother, I passed mine. 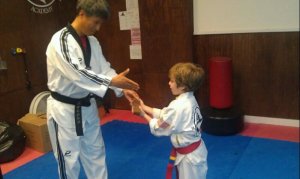 This year, getting his brown belt. He and the Master still friends. I still want to kick his ass.