Staring out my kitchen’s sliding glass doors; I see the house behind us. Snow drapes off its roof and rises in small sloping drifts up the blue grey aluminum siding. A few months ago, I wouldn’t even have seen the house because of the fence, but the owners, two retired sisters who are looking to move, discovered that one of our fence poles was 6 inches on their property, and those 6 inches may as well have been 6 feet as far as the town was concerned. Yet instead of easily inching over the one pole, my husband, in one impulsive sweep, decided it was time for a backyard makeover. He removed the entire fence along with all the trees lining our yard, leaving nothing but mounds of dirt, which are now covered by mounds of snow, in between us and our soon to be ex-neighbors.

It’s been a mixed blessings kind of day. Like, we played Bingo at the temple and two out of three of my boys won! Two of three. And although there were no complaints from my two boys at their basketball games where both played well, there were many from the one who had to sit and watch both games. And lastly, my brother called to say he briefly spoke with my father who told him to call him back in a ½ hour but if he didn’t answer to call 911. When we called back, he answered. So the day was like that, kind of up and down, and I rolled along with it.

Sometimes I feel astray. Especially in moods and moments like this, staring out windows, feeding my melancholy.  But then the chimes ring, my family barrels in and there is no longer time for musing and melancholy, or as my grandmother would say, “My head up my own ass.” My husband has made a special trip to KFC for Super Bowl Sunday and now it’s time to feed my family instead.

The kids are digging in, grease shining off their smiling lips. Well at least two out of three of them. One is a vegetarian, more accurately a ‘carbetarian’ and he is already scrunching up his face just from the smell.

I take a last glimpse of my demolished back yard that we’ll hopefully redo sometime, but the kitchen comes first and we were supposed to start that project two years ago. I no longer see the neighbor’s house. I see my family’s reflection in the glass; a bucket of chicken on the table, my husband at the head, my animated boys doing what they do; one singing, one laughing and one about to storm off in outrage.

It’s a typical evening in a typical life that is never typical, but perfect and imperfect, ordinary and extraordinary, and where at any given moment two out three ain’t bad. 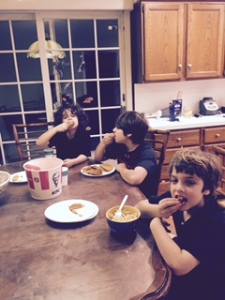 Another day in paradise…

It just changes you. I don’t know whether it’s the brainwashing from years of watching the television commercials showing pristine beaches and sun drenched skies; the happy faced islanders inviting you into their secret, but the moment you arrive at your tropical destination, your eyes soften by the view, and so do your perceptions, your values, your needs. As your blood pressure drops with each gentle wave lapping to shore, you can feel yourself slowing, smiling more easily, melting into your lounge chair.

It is easy. All of a sudden, life is easy. Those urgent issues and obligations that required your attention, the laundry and errands that needed to be done, all disappear on the endless watercolor horizon.

The children in their suits, splashing, running, turn golden – even with the constant gooping on of the sunscreen, and soon you even relax about that.  Because they don’t just turn golden from the sun, they shine with health and happiness and pleasure. They are native, they are free, they are perfect. And you see it. You see their perfection in this crazy dream of a place, where you are lazy but energized, sublimely dreamy, yet more keenly awake then you’ve been in months.

You wonder why you don’t take vacations more often? Why vacations aren’t more like real life? Why we can’t somehow meld these easy feelings into our every day. Why this can’t be real life. Because it certainly feels real. It feels vibrant and full. It feels warm and intoxicating. It feels like what life should be, if life were about finding peace in your soul.

But even in a place with service so relaxed you might wind up getting dinner while waiting for your breakfast, the days roll by, and soon you have rinsed your child’s sand covered toes for the last time, and you suck in your last sweet breath of air suffused with nature’s Valium.

The colorful fish disappear with the packed snorkel gear and we see the last lazy chameleon idling across the way. It is a long trip back to real life, our eyes and our brains gradually adjusting to the harsh change of scenery; the long uncomfortable plane ride, the cranky, bickering children. The bright, unnaturally blue waters recede into the background, replaced by grey buildings and technology and people who seem more grey as well.

It is shocking yet familiar and we readily accept what we know. We pull up to our quiet street, which looks altogether different but no less beautiful than where we were, and carry exhausted children to their beds, which they curl into, smiling blissfully, like they’ve been reunited with a lost friend.

Giant bags of laundry and unpacking left for the morning. The time line that was offline is resetting. Things will be done again. But for now, there is sleep and hope for one more night on an island of dreams. 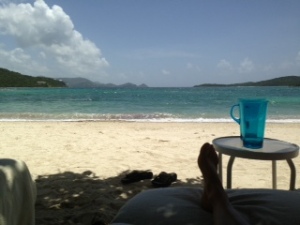 The room swelled with people, some talking and hugging, others laughing and shoving deli meat sandwiches in their mouths. It was a party, except the guest of honor was dead.

We were at our friends’ Aiden and Alyssa’s house to pay a Shiva call for Aiden’s mother who had just passed. A year and half ago, she had been diagnosed with a blood melanoma. Until recently, she had not shown any real symptoms or signs of being sick. The doctors said that it was treatable and until the other day, it had been. She was there in the morning when they drove to the hospital, but 12 hours later driving back, she was gone. Just like that.

At the house, we chatted amiably with many people, about many things, but only very briefly touched upon the reason we were there. Aiden held it together admirably and everyone was relieved to follow suit and pretend. There’s nothing about death and final goodbyes that doesn’t create instant discomfort and clueless awkwardness for those bearing witness. So we ate little cookies and ignored the elephant in the room, or in this case, the small, sweet blonde mother and grandmother who wasn’t.

Now that I’m over 40, I keep running into this problem in life; it’s called death, and no matter how I try, there’s no getting away from it. It seems, and I never actually realized this until my late 30’s, but people die. Yes! I know. I was shocked as well. Of course, I know people die. I’m not an idiot. Lucille Ball is obviously no longer with us, or Dick Clark or Patrick Swayze or Farrah Fawcett, but somehow, when people I knew actually died, it totally threw me for a loop. Not just grandparents, but friends. Young people who were supposed to have their whole lives ahead of them, apparently, did not. They died of unnatural causes at unnatural ages. And now I seem to be at the age where parents start dying. I am not happy with this!

When I got home that evening, I gave my mom who was babysitting, an extra hug and ran up to do the same to my boys. They were almost ready for bed, and by almost I mean, jumping around in their underwear giggling like hyenas. I corralled them all into bed and Michael, my middle child, pushed a book in my hand. “Read this, Mommy.”

“Of course.” I said automatically, but when I looked down I wished I hadn’t.

“Love You Forever” by Robery Munsch. My book nemesis. Someone had given me this book when my oldest was born and I cried like a baby from beginning to end. Back then, I blamed my hormones and new-mom status, but returning to the book two years later, the same thing happened. A few years after that, I tried again, and still could not make it through without breaking down. I have successfully avoided reading the book for over three years, and tonight, fresh from a Shiva call, it was in my hands again. “Baby, let’s read something different.” I tried.

“This is the book that makes you cry, right?” Michael taunted, his elfin face smiling mischievously.

How did the little rat know that?  “Maybe.” I said defensively. “But I just think you should pick something else. It’s a baby book.”

Oh, a challenge. Bring it on. “Fine.” I agreed, secretly steeling myself. I knew exactly what this book was and I was prepared. I could make it through I told myself and started reading.

I barely began, and I knew it was over. Tears rolled down my face and my voice quivered as I read the poem that threaded through the story of a mother’s never-ending love, “I’ll love you forever, I’ll like you for always, As long as I’m living, My baby you’ll be.” My extremely sensitive children cracked up laughing as I struggled to finish. By the end, I was a complete mess. My boys loved it. “Again!” they all squealed as I tried to control my heaving.

Exhausted from my emotional evening, I tucked the boys in; snuggling a little longer and hugging a little tighter. The book’s poem played over and over in my mind; its theme penetrating every sappy bone in my body. Even thinking about it now with the book safely tucked away in between a hundred others, hopefully never to be pulled out again, I can feel the tears in me rise. From the moment they are born, our babies are everything. Even when they grow and go, a mother’s heart goes with them, but there’s only so far it can go. Poor Aiden. Poor Aiden’s mommy. Poor everyone.

Damn. I hate that book.