Exposure. And my moment in the sun

My house was as clean as it was going to be, but of course I was a wreck. Why did I agree to do an interview for the Today Show? Why?!

Well first off, it’s the TODAY SHOW! Not to discount my crucial role as the Tornado in my fourth grade production of the Wizard of Oz, but I never had any opportunity to feel famous for a minute. As nervous as I was, I wanted my minute.

A car pulled up to my house and a young cameraman and another producer got out. Neither looked like Kathy Lee or Hoda.  Damn.

His excitement was adorable and I smiled at him until he said, “Now you’ll make more money, right?”

Hmm. Not as adorable.

But who had time for childish nonsense? I was going to be on television! So it was for writing an article about dressing my kids inappropriately in winter. Whatevs.

The camera guy set up, and finally a bright light stared me in the face.“Ready?” he asked.

Uh no. I’ve made a mistake. A big mistake. Definitely not. No way.

“Great!” He smiled, sporting an adorable dimple, “I’m going to ask you questions but don’t look at the camera or me when you answer. Look to the side.” He pointed to where the other producer stood.

“Um, I’ll try,” I said but when I started answering questions, I’m pretty sure I looked like I had tourrets since I kept twitching to keep myself from turning toward the sound of his voice. Still I babbled on, as I generally do, smiling too much, even playing to the camera. All of a sudden I was a 20 year-old flirt in a 44 year-old face that didn’t even have enough sense to put on any makeup.

Why didn’t I put on makeup??! I was so not ready for my close up.

Typically just saying my name aloud to a group gives me heart palpitations. The last time I put myself in a high pressure situation was at the Algonquin Writers’ Conference to pitch my novel to editors. There I felt like I was going to throw up, but right now I couldn’t seem to shut up.

Apparently I had become an attention whore.

On Monday I was happy enough to have a piece in the Washington Post on the bizarre trend of boys wearing shorts in the winter and when it started getting traction, I was thrilled. Then the editor at the Post emailed me that the piece was going viral. I never really understood exactly what that meant until the TODAY show called for an interview, even writing a copycat article citing me. Citing me!!

‘You’re famous!” a friend from another state texted after one of her friends unknowingly shared my article with her. And really I felt a little famous, lunching and taking calls, prepping for my interview and freaking out with friends.

My mouth hung in a perpetual state of fascination and for days my fingers also seemed stunned because I couldn’t write a word. I was too busy chatting and laughing, checking stats and appreciating my moment. I couldn’t focus on anything but my shining self.

By Friday, the article had run its course and the interview had aired. Even though I cringed watching and listening to myself – all 20 seconds of me – I’m proud that I did it and wrote it, and that my words sparked a conversation that led to a segment on a national television show.

It’s been a whirl, but I am happy to be yesterday’s news; once again in my chair in front of my computer, a blank page staring back at me. 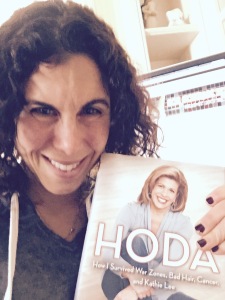 Especially if I hope to ever meet Kathy Lee and Hoda.