I’m waiting for my kids to finish up an extremely important video game. If they don’t, apparently it will be catastrophic. Everything they have worked so hard for will be destroyed – the levels completed, the points accrued, the hours spent ignoring me. It will all be for naught.

I wish I saw this same level of commitment when it came to putting their clothes away, finishing up  homework, reading a book or just generally focusing one tenth of their attention to the words coming out of my mouth as they do to the zombies trying to eat them or the football players running on electronic fields of green.

Gone are the days of carefree casual communication. When my boys walk in from school, they drop their backpacks and head straight for their devices like homing pigeons drawn by some unconscious motivator. I try to intervene with small talk – Hey, how was your day? Anyone want a snack? What happened in such and such class? – and general fussing about but they swat me away with nods and non-communicative grunts.

I consider ripping devices from their little paws and demanding attention, have in fact done it many times but now I’m trained and generally sigh and shuffle off and wait till they’ve had their fix. I’ve seen addiction and they’ve just gone through 8 hours of withdrawal. It seems cruel not to give them 15 minutes.

These days it seems children and teens and their devices go hand in hand. Where they go, it goes and communication goes out the window. I can’t even say it’s just about the younger generation. We middle-aged folk are similarly attached, yet we were around before microwaves, ATM’s and computers and we still know how to use a pot, get money from a teller and write freehand. We hold our books to our hearts but lug Kindles in our bags. We still have CD’s and even cassettes stored away, if nowhere else but in our brains. So yes, we are attached to our technology but we know how to live without them, because we have.

But the kids have not.

The iGeneration is all about technology, and communication without personal contact. I’d like to blame them for my oldest son’s questionable social skills but I can’t. He’s as naturally shy as my other son is naturally social and my youngest is somewhere in between.  It has nothing to do with the technology.

And so it goes. Every morning, sleep still on the brain, coffee in hand, my oldest gets into the car and we head off to school. I immediately pepper him with questions about his day while he answers only to the device in hand.

I sigh, turn on some music, sip my coffee and shake my head as I bob along to the new CBS FM, no more golden oldies, just recent oldies for getting oldies like me. I pull to the curb and he shoves his phone away. “Bye Mama,” He says, and before he gets out allows me to push the hair away from his eyes then flashes me a gorgeous heart stopping grin.

All is not lost.

So yeah, there’s this… 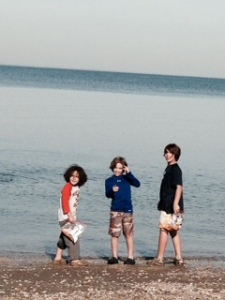 But there’s also this…

Mama to 3 boys, wife to Mr. Baseball and daughter of a sad man. I have a double scoop every day.
View all posts by Ice Scream Mama »
← Mama’s Boys are Growing Up
Victory and Defeat from the Mom on the Sidelines →