Latke them up and don’t let them go

My kitchen reeked of potatoes and onions. The smell infiltrated my hair and clothes, and even after a shower and thorough shampooing, the scent would linger hours later, causing dogs to trail after me as well as one ever hungry husband.

I was frying up latkes for my 11 year-old son’s multi-cultural holiday fest at Middle school the next day, and had been at it all afternoon.

I tried to get out of it. I did not want to make latkes. I suggested bringing in jelly donuts from Dunkin Donuts. I suggested chocolate gelt. Nope, he shook his in-need-of-a-haircut head. He wanted latkas.

I huffed and puffed and blew a lot of hot air, but of course, there I was, splattered with oil, spatula in hand flipping one potato pancake after another when my son walked in from school with his friend.

I nodded, proud of myself. Look at me, I’m making latkas. “Would you like one?” I asked, ever the altruistic domestic fry goddess.

His friend and my son each took a pancake and munched happily. “Good.” His friend said, “My mom is making them too for the multi-cultural fest next week. “

My eye started to twitch.

I turned to my son, “Honey? When did you say your thing was?

Sheepish, sweet, aw shucks oops. “Oh. I think I made a mistake.”

Gripping the spatula tightly, I flipped a potato pancake instead of flipping out. “Oh, ya think?”

Hard to stay mad with that goofy smile combined with a sorry mama, so I turned my fire on the pan, finished up and froze the batch of them.

The next week. 7am… Actual Multi-cultural fest day.

“Baby, I’m going to reheat the latkas and bring them to school around 1pm.”

Baby bear paws around my waist, his face buried in my stomach. “Thank you, mama.”

He is crouched over, still hugging, his eyes big and hopeful. “Will you not come to my multi-cultural fest?”

But I made latkas… But you always want me to go…. But…

“Please.” He says and hugs my waist tighter, squeezing any defiance from me.

He squeezes me one more time, and I run my fingers through his moppy shag before a car beeps outside and he runs out the door for his ride to school. My baby is growing up. I hate this day.

I stand there for a second, watching and waving from the screen door when I feel a presence sidle up next to me. It is my youngest. His small, strong body is naked but for his Skylander underwear. He rubs the dreams from his eyes, but some still linger and he raises his sleepy arms to me. He is five for another two weeks and I will suck every drop of five left in him. I lift him up and cuddle him as I watch the car with my oldest disappear.

Sighing, I stare at the empty street. It was only a blink ago that my 11 year-old was in my arms, never wanting me to leave him, asking where his wife would live when he married, and worrying we’d send him away to college.

“I’m hungry.” My five year old says, dragging me from my wistful melancholy into the kitchen.

I wish I could keep them more innocent than knowing, more mamma boys than young men, more needing me than their friends. But time marches on, and the only thing that seems to linger is the smell of latkes. 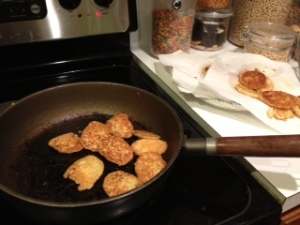 Mama to 3 boys, wife to Mr. Baseball and daughter of a sad man. I have a double scoop every day.
View all posts by Ice Scream Mama »
← Talk to the Spoon
Ice Scream Mama’s terrible, horrible, no good, very bad day →