Facebook RSS Feed
← What’s really wrong with men
You got to go with Aunt Flo. Or she will destroy you. →

Sometimes, you just got to take a shot

This is the way it has to work. No explanation. No sweet talk. All business.

My three boys casually ignore me, focusing on SpongeBob.  Sometimes, I really want to wring that sponge.

My “Now” sounds like it looks, all exclamation points, but amazingly, they don’t hear it that way and slowly amble toward their shoes.

“Where are we going?” my oldest asks, but I brush off his question.

“No questions. Time to go.”

My two youngest race out the door.

“So where are we going?” My oldest persists, and because he’s eleven and has showed progress and maturity these past couple of years, I tell him.

“Oh.” He says anxiously, eyes wide.  “Do they know?” He gestures toward the happy faces climbing over each other in the minivan.

I shake my head no.

“Can I tell them?” He asks, eyes glinting.

“Wait till we’re closer. The less crying I have to hear the better.”

During the seven minute drive, the secret spreads like a low hum across the car, reaching my youngest as we pull in, his eyes alight with panic. While the other boys wait, I patiently try to coax him from the car.

“Come on,” I plead. “It’s so quick. You didn’t even cry last year.” Uh, except for the half hour preceding it, of course.

He backs away, deeper into the third row.

Realizing negotiation was futile, I not so patiently pick up his flailing, twisting body and carry him. Once inside, he calms some, until the doctor appears smiling, with his Tweety and Sylvester tie and a syringe. It is a semi-creepy combination.

Oldest boy goes and takes it in arm like a pro.

Middle boy goes and barely bats one of his ridiculously long lashes.

I pull him out from under the patient table and talk gently to him as he struggles to pull away. I show him how happy his big brothers are and he kicks at the doctor. I promise him treats when he’s done, but he is like a rabid baby bear covered in butter in my arms.

Finally, I restrain him enough for the three seconds it takes the doctor to insert the needle and it’s over.

My boy takes his time breathing heavily, recovering from his experience. “See, it’s really not that bad,” I coo, petting his curls. “It’s over so fast. You were very brave.”

I nod in agreement.

The kid may not be good at taking shots, but he’s certainly good at calling them. 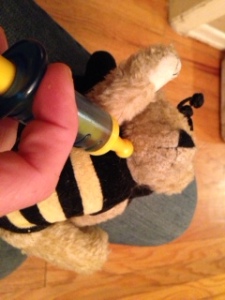 Mama to 3 boys, wife to Mr. Baseball and daughter of a sad man. I have a double scoop every day.
View all posts by Ice Scream Mama »
← What’s really wrong with men
You got to go with Aunt Flo. Or she will destroy you. →

Leave a Reply to The outstanding wife Cancel reply