All night the snow fell in big fat flakes, layering our streets with glittering magic. It was the first snow of the season. A blizzard they said, causing us all to scurry to the gas stations and supermarkets for water, milk and wine, you know, the necessities. After Hurricane Sandy, we don’t take chances.

When all was said and done, we got about 15 inches. I’d love to say my children were jumping up and down with glee, too excited with the fresh powder to contain themselves, but really, it looked like any other Saturday morning in my house, with them in their undies and their eyes glued to multiple screens.

They gave the snow barely a passing glance till their allotted game time and mommy service of pancakes, cereal and Nutella toast had run out. Then finally, as they came to life, the snow did for them as well.

They waited impatiently until Howard finished clearing our walkways with a borrowed snow blower. It was the first time I’d seen my husband pushing the contraption. Something about it evoked suburbia more than any other thing I’ve seen him do in the eight years living here.  I almost expected a neighbor to walk out and hand him a cup of cocoa. Wait, was I supposed to do that?

Finally, Howard finished and it was time for sledding. That’s when the real excitement began.

Thermals, socks and hats flew all over my hall, and the children fidgeted with now unrestrained eagerness.

“Tyler!”My husband barked, “Stop swatting your brother with your socks! Put them on!”

“This suit is hurting my marshmallows.” Julius complained, tugging at the crotch of his snow jumper.

“Oh, your marshmallows?” The older boys taunted and danced around him, swatting him with socks.

My husband looked at me, exhausted and extremely aggravated. “Can you do something?”

Do something? I was in the middle of the mess as well,  getting them clothes, shoving their bubbling boy excitement into snug little suits. Trying to contain them was like trying to stop corn kernels on high heat from popping. But I still had the picture of him out blowing snow while I played on the computer, so I tried harder to get them organized.

Now if I could only find Michael’s boots. I looked around the mess of crap, searching.

Tyler and Julius were stomping around the house, fogging up the screen door like dogs, impatient to be let out. I was at a loss. I checked all the places I thought they should be. We hadn’t worn our boots yet this year, so I had searched for them just the other day to make sure we were prepared.  I even went to the store yesterday to pick up a new pair for Tyler who had outgrown his. I really thought I had a pair for Michael.

Michael began to whine. “Forget it! I don’t want to go!”

Sensing trouble, I raced upstairs to look again and found a pair that might still fit Julius. If Julius’s pair, which was Michael’s last year, would still fit him, maybe we were in business.

Julius’s boot was tight on Michael. He complained even before we tried pushing his foot down. Julius was more game. Like Cinderella’s step sisters, he tried with all his heart to shove his foot into a shoe that was clearly too small.

My husband lost it.

Desperate, I pulled out a pair of Timberland boots. They weren’t snow boots, but I walked around Albany in winter with ones just like them. Besides, how long were they really going to be out there? “How about these?” I called hopefully. “Can Michael wear these?”

Didn’t matter. Michael wouldn’t even put them on.

Frustrated, Howard decided on a solution. “Come on, we’ll go into town and just get a pair of boots. Let’s go!”

“No! I don’t want to buy boots!” Michael screamed.

Michael melts down. Crying, he throws all the ill-fitted shoes at him as he goes for the door.

I run upstairs in a last ditch attempt to find the boots I know were there.

And then, a snow miracle.

“I found them!” I scream and run downstairs, almost tripping but catch myself. “I found the boots!”

Quickly, I help Michael get the boots on. Howard, of course, really hadn’t gone. He wouldn’t leave Michael.

“In Tyler’s closet. I have no idea how.”

Michael is finally ready. The other boys are already in the car. Calm has been restored.

My husband looks at me. “Ready?”

Me? “Uh, I’m not going?” Not me. I’m no good in snow. I get so cold. I just wind up sitting in the car with the heat on. I’ve learned. It’s no fun for me. Nope, not going. I grit my teeth, waiting for the backlash, but he just looked annoyed and left.

For about a minute, I feel guilty, but only for a minute. I pick up the accumulation of clothes covering my floor. It’s so peaceful now, inside and out. I get myself that warm cup of cocoa and happily sit down to write about what the snow blew in. 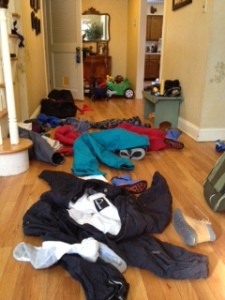 we’re’s the snow blower? wait, i guess that’s me.

Mama to 3 boys, wife to Mr. Baseball and daughter of a sad man. I have a double scoop every day.
View all posts by Ice Scream Mama »
← If I had a therapist…apparently I’d babble and suck up
My children are never going sledding again →